Reflecting Passion and Respect for Nature and its Wildlife 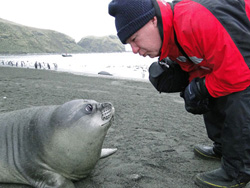 John Martel and his wife Kathy have traveled extensively and enjoyed the entire coastline of Canada via water as much as possible, closing the loop in 2009 by exploring the fabled North West Passage.

They explored the coast of British Columbia and Haida Gwai (formerly the Queen Charlotte Islands) in a sailboat, spent time in the Great Bear Rain Forest (home of the Spirit Bear), and organized extensive photography trips in a grizzly Bear preserve, the Khusteymateen Valley.

They have visited most Arctic communities and, more recently, John even spent three months in the Antarctic photographing penguins and seals, and swimming with whales on the Silver Banks (an area where humpback whales gather to socialize and bear their young).

Their passion for the wild developed over many years, augmented by John’s burgeoning interest in photography in the early 1990s.

John’s main interest quickly became close-up photography, carried out in a non-intrusive way which is respectful of the animals in their environment.

He supports many conservation groups, most notably Pacific Wild and the Nature Conservancy of Canada, doing his part to protect natural habitats for future generations.

His photos reflect his passion and respect for nature and its wildlife, values he learned a young age when he spent most of his summers in and around Algonquin Park. Over time, with the help of experienced locals, he mastered outdoor skills such as fishing, canoeing, camping, tracking and observing wildlife. All these skills and interests helped him in his role as a teacher, and to this day he’s proud to have set up an outdoor education program at St. Clair College in the mid-1970s.

© 2016 John Martel Photography. May not be used without permission.